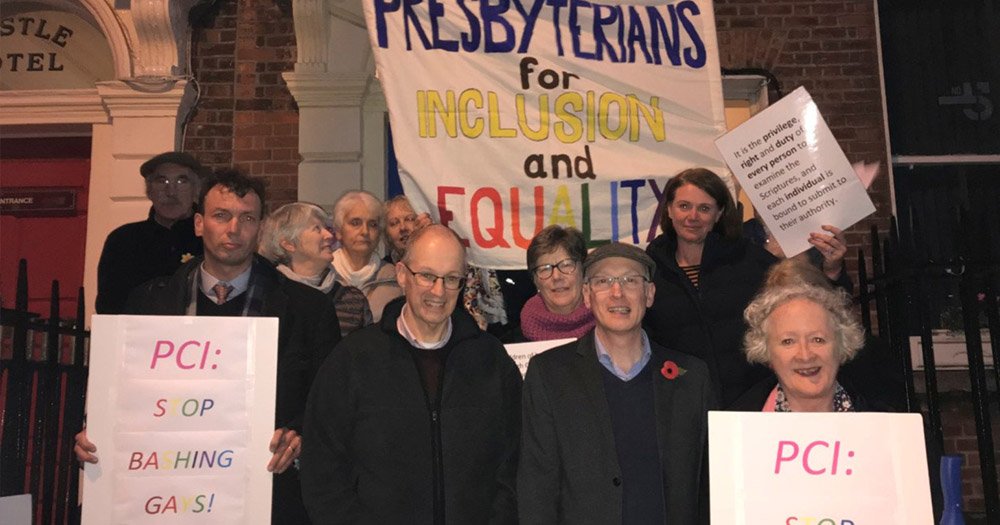 Members of the Presbyterian Church have protested outside a Dublin church meeting due to the dismissal of a long-serving elder for being in a same-sex marriage. Protesters gathered outside for a ‘Silent Vigil’, holding banners reading, “PCI: Stop bashing gays!”

On Wednesday, November 5, around 40 church members attending a Presbytery meeting near Parnell Street were greeted by a group of protesters. Former elder Steven Smyrl spoke about the protest and what spurred it on: “When [people] heard about what had been inflicted upon me, they decided to gather a group together and to protest at last night’s meeting. My husband Roy Stanley and I were invited to join them. There were folk at the protest from four of Dublin’s five Presbyterian congregations. Roy and I made the two rainbow placards saying PCI: Stop Bashing Gays!”

Smyrl further stated, “The purpose of the protest was to let the leaders of the Presbytery know that they do not speak for everyone. It was also to show ordinary members of PCI [Presbyterian Church in Ireland], who [are] generally astonished by what is being inflicted upon us by a number of vocal bigots, that there are folk within our denomination willing to make a stand and hoping that they will be brave enough to join us.”

Earlier in 2019, an internal church commission set up an investigation into elder Smyrl and his husband, Roy Stanely following a raised “concern”. From the probe’s findings, the Presbyterian Church of Ireland concluded that he should be dismissed with immediate effect.

Speaking to the BBC, Smyrl described the impact of his dismissal, “When they sent me what had been submitted against me, I felt sick to the stomach. […] In a personal way, I was just, how can I say, worn out, distressed.”

In 2011, Smyrl and his husband entered into a civil partnership. They were officially married seven years later in 2018, the same year the Presbyterian Church voted to deny full membership to anyone in same-sex relationships. Smyrl described the vote as: “a controversial decision which was far from unanimous! I attended that Assembly, not knowing it would be my last, and the atmosphere was toxic!”

Over the last two years, Presbyterian members have marched in Dublin Pride in defiance of the Church’s stance. The banners they carried during the parade were used again outside the meeting last night. Smyrl highlighted the importance of coming together: “These are ordinary members of PCI, none of whom are gay, but who wanted to show solidarity with their gay brothers and sisters – in fact, all shades of LGBT+ people.”

Since his dismissal, the public has shown overwhelming support to Smyrl and his husband. He said, “Roy and I have been bowled over by the support we have received not only from a huge number of fellow Presbyterianism but by the public at large. Your average man or woman sees our relationship for what it is: two people who love each other deeply and want what is rightly ours – the right to form a family as provided for in law.”