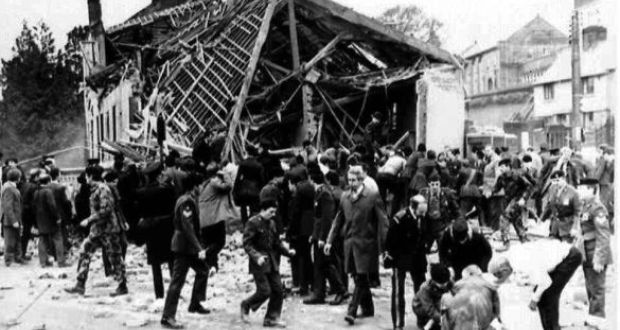 Photo – The scene following the Provisional IRA Enniskillen bomb blast in Co Fermanagh in November 1987 which claimed the lives of 11 people.

Republican paramilitaries were responsible for almost 60 per cent of all deaths during the Troubles and as such the republican community could well be seen as an oppressive minority who maintained the conflict longer than was necessary, according to leading academic, Barry Roche writes in The Irish Times.

Prof Liam Kennedy of the Centre for Economic History at Queen’s University Belfast said that his analysis of the figures compiled by David McKittrick in his book Lost Lives on those who died in the Troubles between 1966 and 1999 showed republican paramilitaries were responsible for over half.

According to Prof Kennedy, there were 2,636 Troubles related deaths during that period and republican paramilitaries accounted for some 59 per cent with the Provisional IRA accounting for almost half – 49 per cent – of all these deaths.

According to his analysis, Prof Kennedy found 1,012 members of the security forces were killed in Troubles-related violence while 392 republican volunteers died in the conflict and some 144 loyalist volunteers lost their lives in the conflict.

“The greatest danger to you if you were a Provisional IRA volunteer was not the RUC or the British Army – it was your own organisation killing you either accidentally or intentionally,” said Prof Kennedy, speaking at the West Cork History Festival in Skibbereen.

“The Provisional IRA was the spearhead or the cutting edge of, as Martin McGuinness described it, ‘the fight for Irish freedom’ or if you prefer the move to coerce 900,000 Protestants into a state that they did not want to be part of,” he said.

“These figures show that the Provisional IRA was responsible for driving the conflict onwards year and year before admitting defeating in 1994 for its ultimate objective of creating a 32 county republic,” he added.

“The Provisional IRA proved the dynamic for three decades of political violence and as such was primarily responsible for the Troubles – the Provisional IRA was not about civil rights or defending Catholic communities, it was about achieving a 32 county republic by force of arms.”

Prof Kennedy said: “There is a basis for suggesting that in some instances there is such a thing as an oppressive minority and in that sense, the republican community, and perhaps extending further into the nationalist electorate, can be categorized as an oppressive community.”