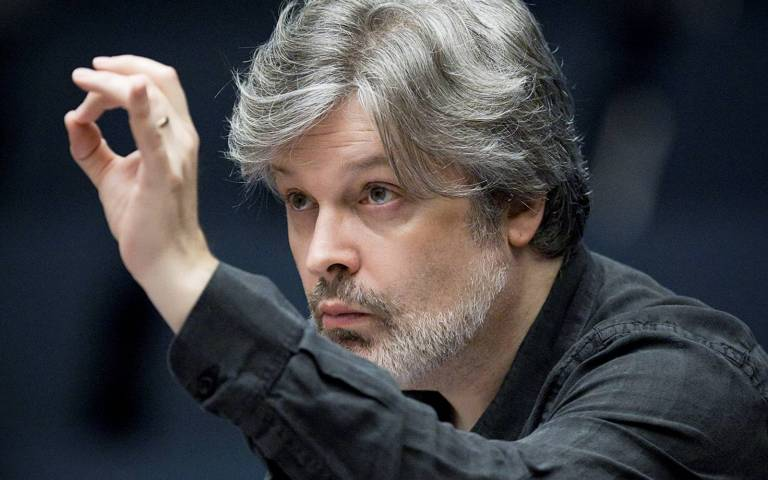 In his latest symphony, James MacMillan is exploring territory that other modern composers shy away from writes Ivan Hewett.

James MacMillan (photo above), Scotland’s most famous living composer, is about to make musical history. He has written an entire piece inspired by the Holy Spirit, the first person ever to do so. It’s his fifth symphony, entitled Le Grand Inconnu (The Great Unknown), which will be performed at the Usher Hall in Edinburgh, as part of the Edinburgh International Festival’s generous celebrations to mark the composer’s 60th birthday.

It may seem surprising to find a contemporary composer being inspired by such an abstrusely theological topic, but MacMillan doesn’t see it as odd. “Actually I’m surprised that composers and artists generally and especially in our own time haven’t explored this area, where ideas of creativity and spirituality overlap.” MacMillan feels it’s the right moment to tackle it, given that we are now living in a post-secular age with a renewed hunger for the spiritual aspect of life. “Music is described as the most spiritual of the arts, even by non-religious music lovers. So there is a genuinely universal understanding that music has a reach into the human soul. People are realising that dogmatic secularism doesn’t have all the answers to life’s big questions. There’s a great upsurge in spiritual music and in music as a gateway to the divine, so I think it’s a timely moment to try something like this.”

Of course, MacMillan’s symphony is unique only in modern times; it doesn’t mark the first ever mention of the Holy Spirit in classical music. Amid the thousands of motets, masses, anthems and hymns, stretching from the earliest days of unaccompanied plainchant to the dazzling coloured polyrhythms of Olivier Messiaen and other religiously minded moderns, the Holy Spirit is regularly named and praised. For example, there are quite a few settings of the Nicene Creed, one of the principle liturgical texts of the Western Church, which is chanted in tens of thousands of churches every day. But for obvious reasons composers have favoured the Father and the Son over the Holy Spirit as topics for musical settings. They perform stupendous deeds: creating the universe, performing miracles, ascending from the dead. These things can be rendered in line and colour, and have been a million times over in religious art. The persons who performed these things can also be pictured. God the Father is often a grey-bearded patriarch, God the Son a willowy, bearded young man with a sorrowful look. Music cannot literally picture these things, but it can catch something of them metaphorically. 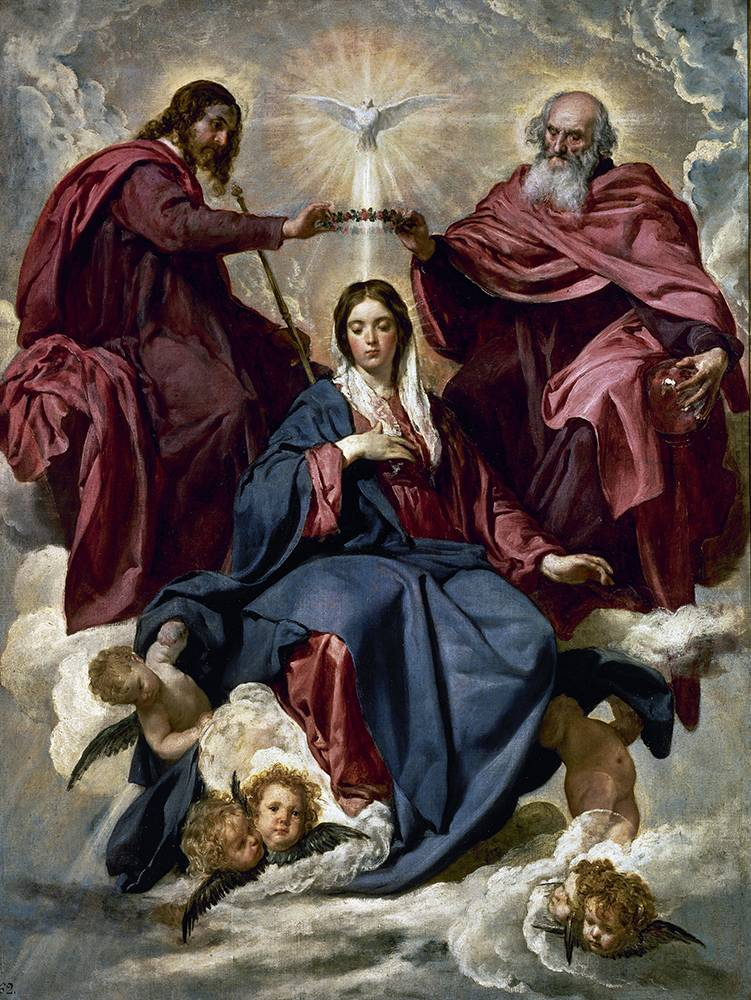 Devout: the Holy Spirit appears as a dove in Velázquez’s Coronation of the Virgin

The shaking of the earth at the death of Christ, the ascent to heaven, the descent to hell; all these things have been depicted in music. The story of creation has been told musically many times, notably in Haydn’s Creation, and Christ’s nativity, trial and execution have received numerous musical settings, most famously in Handel’s Messiah and Bach’s Passions.

Here and there the conjoining of Father, Son and Holy Spirit has been conjured by music that makes a show of being in three clear parts, for example in Monteverdi’s Vespers. But the Holy Spirit itself resists being pictured, because its essence is so mysterious. It performs no acts and yet it’s active all the time, as the interface between God and humanity. Representing such a thing has proved a challenge for artists. Traditionally in the West, it has been imagined as a dove, fluttering between Father and Son, though occasionally you find it embedded within the trinity as a three-faced person (an image later condemned as heretical), or even a geometrical symbol like a triangle.

‘There’s a great upsurge in spiritual music, so I think it’s a timely moment to try something like this’

It is not surprising that something so nebulous as the Holy Spirit has received no attention from religious composers of more recent times who have written principally for the concert hall. And yet if any composer alive could tackle the subject effectively, it’s James MacMillan.

He’s probably Britain’s best-known living classical composer, who has become famous – some would say notorious – for putting his Catholic faith at the centre of his musical creativity. The religious part of his output runs all the way from tenderly intimate choral miniatures, many of them written for his local church choir, to big-scale choral-and-orchestral Passions (recounting of the story of Christ’s trial and Crucifixion).

More recently he’s been outspoken on religious sectarianism, which he still feels disfigures his native country, and also what he feels to be the small-minded xenophobic populism of the Scottish government’s cultural policy. But these days he has retreated from the political fray, preferring to concentrate on his family, composing and being the artistic director of the Cumnock Tryst, a music festival rooted in the deprived Ayrshire town of Cumnock where MacMillan’s coalminer grandfather lived, and where he himself grew up. 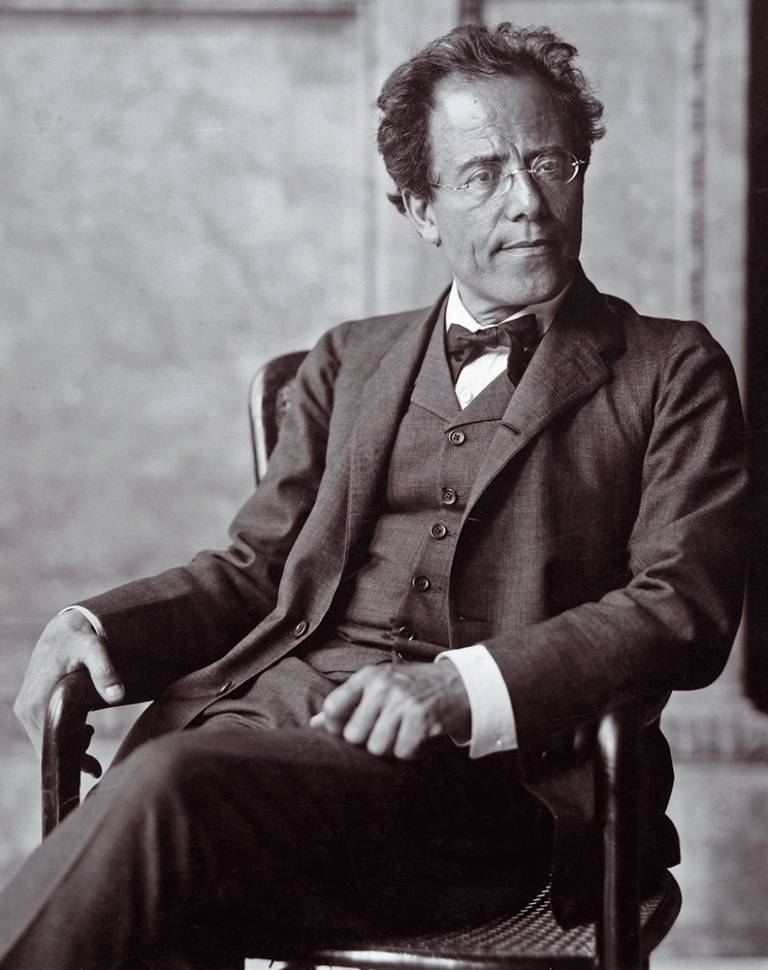 The Holy Spirit is praised in Mahler’s Symphony No 8

Now comes the new symphony, which like MacMillan’s recent Stabat Mater – performed last year in the Sistine Chapel and live-streamed to an audience of millions – has been commissioned by the Genesis Foundation, set up by philanthropist John Studzinski. Once again the performers will be that wonderful chamber choir The Sixteen, joined for this piece by the Scottish Chamber Orchestra and Genesis Sixteen, the young choir that was created and funded by the foundation to act as a training school for aspiring young choral singers. Wisely, MacMillan has chosen to steer clear of the theological minefields around the Trinity. “I learned about the Trinity while at school,” he says, “but only in a very basic way, I found it all very baffling. Christ mentions God the Father and the Holy Spirit a bit, so clearly these things meant something to him. One of the passages of Scripture I set in Latin in my new symphony is the one where Christ talks about knowing the Holy Spirit exists because it wells up within you. The only reason we’re still talking about these things is because He talked about them.”

As with any abstract notion, the Trinity can be captured in music only through metaphors, and in finding the appropriate ones MacMillan was much helped by the contemporary Belgian/Swedish theologian Wilfried Stinissen. “It was through him that I got the idea of the three physical elements associated with the three parts of the Trinity – wind, water and fire. This gave me something tangible in the physical world I could grasp on to.”

So is he really the first composer to tackle this topic? “In modern times I think I may be. In the Renaissance composers often praised the Trinity, and, of course, Mahler praises the Third Person in the tremendous last movement of his Symphony No 8, where he sets the medieval poem Veni Creator Spiritus (Come Holy Spirit). I wanted to do something different, find a way of expressing something about the Trinity with the resources of modern music.”

It’s an enticing prospect. Across the two millennia of the Christian era, the idea of the Holy Trinity has inspired theologians and philosophers to extravagant but often mystifying speculations.

Perhaps music can shed a new and more illuminating light on it.

Ivan Hewett was writing in The Daily Telegraph, August 13, 2018