PRESS FOCUS – The Troubles should be consigned to the past, not revived in court 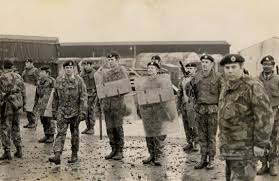 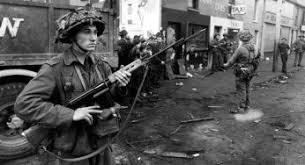 Fifty years ago today saw the start of Operation Banner, the deployment of troops to Northern Ireland to stop Protestants and Catholics killing each other, Philip Johnston writes in The Daily Telegraph

Initially, 300 men from 1st Battalion The Prince of Wales’s Own Regiment of Yorkshire were sent to Londonderry to quell the rioting known to history as the Battle of the Bogside. Harold Wilson, the prime minister, on holiday in the Scillies, liaised with James Callaghan, the home secretary, over what would prove to be a momentous decision, albeit one they had anticipated for some time amid worsening sectarian strife.

At the end of April, Wilson told the Cabinet that “if it became necessary for the troops to intervene … the constitutional consequences might be very grave, and once we were involved it would be difficult to secure our withdrawal”. That was to prove prophetic; but Wilson still hoped that any deployment would be temporary.

After the troops went in on August 14 at the request of the beleaguered Northern Ireland administration, the government declared it to be “a limited operation” lasting only as long as it took to restore order in Londonderry. That night, however, violence flared in Belfast, with five people, including a child, shot dead in gun battles that raged across the city. Homes were set alight and mobs roamed the street. The province was on the brink of civil war.

As a boy visiting family for the summer holidays, I recall standing on the Ormeau Road watching the Army trucks heading into Belfast city centre while a long line of decommissioned buses headed the other way to avoid being hijacked and torched or used as barricades. Smoke hung in the air to the west where Protestants had attacked Catholic enclaves, with whole streets and a mill ablaze.

In Londonderry and Belfast, the soldiers were greeted by the nationalist communities as saviours whose very presence in Northern Ireland was evidence that the hated Stormont government was finished. It did not take long, however, before these same people considered the Army to be an occupying force in a foreign land. The soldiers were thrown into total mayhem, for which they were ill-equipped, expected to carry out policing activities in a part of the UK for the first time since Partition. The Army had some experience of law and order enforcement in places like Cyprus and Malaysia. But this was something different entirely.

We know what happened next; but back then, the shock of seeing barbed wire going up across British roads with armed soldiers searching British cars and frisking British passers-by for weapons was profound. Exasperated young officers found themselves vainly trying to mediate between the two communities over tiny patches of land claimed by one side or another.

History repeats itself. In Belfast, outside a house on Dover Street between the Shankill and Falls roads, an argument raged over where the peace line should be drawn, with the Army caught in the middle unable to satisfy either group. This was precisely the same spot where in July 1921 an Army machine gun battery took up position to protect the same Catholic enclave from Protestants determined to remove them. The peace line – now a high wall – is still there, to this day.

To say the least, this was not a predicament the Army either sought or welcomed. Operation Banner would turn into its longest-ever continuous deployment, lasting until 2007 – almost 10 years after the Good Friday Agreement brought a political settlement that has since foundered. For the most part the military acted with great professionalism and stoicism in desperately difficult circumstances, paying a heavy price. More than 700 soldiers were killed in terrorist attacks and, while the Army killed some 300 victims of the Troubles in various engagements, these were investigated and occasionally prosecutions were brought.

Given this history and the passage of time, what possible interest – and whose – is served by pursuing soldiers for alleged crimes perpetrated so long ago? How is it that we are about to put on trial in a British court a septuagenarian former paratrooper for his suspected complicity in deaths that occurred 47 years ago? At least half a dozen other prosecutions are in the pipeline.

Partly this has to do with the European Convention on Human Rights to which the UK was a signatory throughout the Troubles with an obligation under Article Two to secure the right to life of all within Northern Ireland. In a notorious ruling by the European Court in the so-called Death on the Rock case, brought after the SAS shot three IRA terrorists dead in Gibraltar, the judges held that Article Two required the government to undertake an independent, effective official investigation into all deaths caused by state agents.

This unilateral expansion of the convention, later written into UK law through the Human Rights Act, was then used to hold the UK to account for alleged failings in past investigations and to compel them to be reopened. In turn, this led to the formation of special units dedicated to the pursuit of historic cases and the continued hounding of veterans. Boris Johnson has appointed a former soldier, Johnny Mercer, as defence minister to stop the witch-hunt.

But how? The best the Ministry of Defence has come up with so far is a 10-year moratorium on cases involving British soldiers serving overseas; but this does not address the Northern Ireland injustices. There is an answer. A few years ago, John Larkin QC, the Attorney General for Northern Ireland, proposed legislation that would bring to an end all investigations, inquests and prosecutions of Troubles-related deaths.

Politicians in Northern Ireland on either side of the divide do not like this and the Army is sensitive to any equivalence being drawn with terrorists. But at the moment old soldiers who served in Northern Ireland are treated even worse than terrorists, many of whom were effectively given amnesties. Fifty years on from the day the Army was sucked into Northern Ireland’s sectarian quagmire it is time to draw a line under the past and bring this travesty to a close.