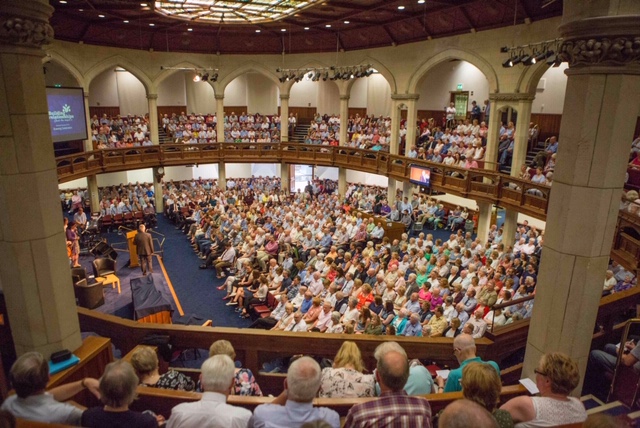 Today (4 June) marks the first full day of business at the 2019 General Assembly of the Presbyterian Church in Ireland.

Around 1,000 ministers and elders from the Church’s 500-plus congregations across Ireland, along with corresponding members from home and overseas, will meet in General Assembly for worship, prayer, celebration and discussion. Over 26 scheduled sessions involving 110 reports, along with over 100 resolutions they will debate a diverse range of public issues and church-related matters.

Meeting in Assembly Buildings, Belfast, the General Assembly is the denomination’s governing and decision-making body and the highest court of the Church. It opened last night with the formal nomination, election and installation of the Moderator, Right Reverend Dr William Henry of Maze Presbyterian Church in County Antrim, one of the youngest ministers in living memory to be elected to the office.

Like all Moderator’s he will serve for one year and will chair, or ‘moderate’ this year’s General Assembly, which will close on Friday. At yesterday evening’s Opening Night, Dr Henry unveiled his theme for the year, which is entitled ‘Enjoying God’.

Exploring his theme, he said that for many of the most committed Christians, because of the pressures and busyness of life and the daily routine of sameness, there was a tendency to simply admire God from a distance without “getting up close and really making a connection with him. It was exactly for that reason that I want to take as my theme for the year ‘Enjoying God’.”

Speaking of one of the pieces of Scripture that was read during the installation service, Romans 5:1-5, the Moderator, who grew up in Mallusk in County Antrim said, “The flow of the passage, and the weight of the meaning is that to live life as you were intended, to get the most from life, you need to have a deep wellspring of joy. And that enjoyment of God comes from a deep transforming relationship with God…I believe that Christian joy gives us an entirely different way to get through life. The joy that God gives is so different it changes your life.”

Following the first three items of today’s business – reports from the General Assembly Business Committee and the Church’s 19 regional presbyteries, the Moderator will receive the delegates from both local and overseas denominations. These include delegates from Transylvanian Reformed Church, Greek Evangelical Church, Church of Central Africa Presbyterian and the Evangelical Christian Church of Halmahera in Indonesia.

Local representatives will also be received by Dr Henry. These will include guests from the Church of Ireland, the Methodist Church in Ireland, the Religious Society for Friends and the Irish Council of Churches and the Presbyterian Church of Wales, who will also address the Assembly.

Following the reception of delegates, the Sacrament of the Lord’s Supper will be celebrated. This act of worship is open to all who love the Lord Jesus and have trusted in him as their Lord and Saviour. This is the first of a number of public acts of worship that will take place throughout the week and includes the reading of the Memorial Roll.

As the General Assembly meets together around the Lord’s Table, the names of the denomination’s ministers who have passed away since last year’s General Assembly will read out.  With many of their loved ones in the public gallery, this year the names of seven ministers will be read. In a private meeting today, the Moderator will also meet the widows and families of those ministers.

Reporting on developments from 2018 General Assembly

To facilitate business during the week its report is divided into four sections, with discussion and debate on its contents and resolutions taking place today, Wednesday afternoon, Thursday evening and Friday morning.

Today’s General Council business contains the report of the Implementation Task Group that was established to address the remit from last year’s General Assembly that, “appropriate training be offered to Kirk Sessions on the theology and practice of the Church’s understanding of a ‘credible profession of faith’ and the pastoral guidelines on homosexuality.”

The Task Group was appointed and directed to put together a resource with a clear pastoral tone to be used by kirk sessions. Reporting on its work to date, it proposes to present a resource on ‘credible profession’ and draft pastoral guidelines for consideration at the 2020 General Assembly to be sent subsequently to the Church’s 19 regional presbyteries for comment. Final consideration will then be given to both the resource and guidelines at the 2021 General Assembly. This year’s General Assembly will also be asked to instruct the General Council to appoint a task group to recommend how best to clarify the vows taken at admission to full membership and at baptism, with a report coming to the 2020 General Assembly.

Following a number of decisions taken by last year’s General Assembly, that led to much public (and private) comment, the General Council accepted that clarification was necessary regarding the issues of decision making and dissent within PCI and established a Decision Making and Dissent Task Group to draw up a report on ‘Presbyterian decision making and the place of dissent’.

That the task group’s five-point remit be was (1) to draw together relevant material from the Code (PCI’s Constitution), Assembly reports and other documents. (2) to outline how decisions are made in PCI’s Presbyterian system of Church government (3) to outline what dissent formally means and how other forms of ‘dissent’ can be expressed and (4) To outline how decisions of the General Assembly can be changed.

The General Assembly will be asked to consider the report and send it down to presbyteries for discussion, with focused questions on decision making and dissent.

The Human Identity Task Group was established in 2017 and continues to work on the challenging and hugely complex issues regarding gender identity both in society and in PCI congregations. In light of the work that is has already done, the report states that there is a need “for a specific resource providing guidance on theological understanding and pastoral care for those in PCI congregations who struggle with gender identity and their families.”

The task group is working on such a resource and plans to release it in the first half of 2020.

This afternoon the General Assembly will discuss the report of the Council for Global Mission, which says in its report that it “is all about global disciples sharing God’s heart for the world, declaring good news and demonstrating God’s love. The Council is tasked with enabling the coordination and delivery of global mission as determined by the General Assembly…and especially where it is beyond the ability of the local congregation and not falling under the remit of other mission councils, partners or agencies.”

The Presbyterian Church in Ireland has a long tradition and strong commitment to global mission since the first missionary was sent out from the denomination in 1841, a year after the Church was established. Today the Church directly supports 22 Global Mission Workers who have a clear outreach focus to their work with 7 partners in 7 countries on 4 continents.

This year’s report includes details of PCI’s global outreach initiatives, especially building teams to take forward church planting in Europe. It also reports on wide ranging global issues that it has been concerned with in relation to the stewardship of creation and intercultural and international relations, for example. The report also includes a paper from the World Faith’s Panel on PCI’s mission in a multi-faith society.

In a number of resolutions before it, the General Assembly will be called upon to ‘give thanks to God for the dedicated endeavours of PCI’s Global Mission Workers and for the generous resourcing of their work by congregations through the United Appeal for Mission and ‘extra-mile’ giving…’

The 2017 World Development Appeal was the first year of the four-year plan, in partnership with Tearfund and Christian Aid, to highlight and combat the challenges of sustainable development in fragile states, with a particular focus on gender justice and the prevention of gender-based violence. The new four-year plan approach is designed to enable the wider church to understand the long-term nature of sustainable development work and the challenges which it might encounter on the ground.

The WDA links the four years together under an ‘umbrella’ theme: the challenges of sustainable development in fragile states. The partner highlighted in the 2018 Appeal was the National Council of Christian Churches of Brazil, which is seeking to confront and challenge gender-based violence and in particular to prevent and tackle gender-based violence against women, with an emphasis on the important role of faith communities in addressing the problem.

The General Assembly will also be updated on the two Special Moderator’s Appeals that congregations were asked to support. The first for Indonesia (October 2018) following the powerful earthquake and resulting tsunami and the second Special Appeal for Southern Africa (March 2019). This was launched in response to the devastation wrought by Cyclone Idai as it swept through the countries of Mozambique, Malawi, and Zimbabwe.

The Council for Congregational Life and Witness will present the first ‘Alternative Presentation’ to the General Assembly, which is entitled Beyond Ourselves. The session is a general challenge to congregations to be proactive in reaching beyond their existing membership and the wider local community. It will also detail Five new resources to help the local congregation which will be highlighted through presentations, DVD clips and interviews.

The Share resource, with a focus on stimulating conversation in congregations enabling reflection on how they might build relationships, cultivate community and invite encounter with Jesus. Inside Out is a resource that has its genesis in the Council’s remit for developing good relations, and has a focus on how to be congregations which welcome others. The Go Deep, Go Wide initiative, has been developed in conjunction with the Council for Global Mission, as a way of stimulating involvement in global mission. The final resource, which has been developed in conjunction with the Good Book Companyis entitled Eric and offers both a resource and a model for effective children’s ministry to children who do not attend church.

This Council seeks to support the on-going life, mission and witness of congregations in their work with all age-groups through assisting in development, offering training, providing and signposting models of good practice and resourcing.

It holds specific responsibility for ensuring the strategic development within PCI of youth and children’s ministry; women’s ministry generally, including Presbyterian Women, young adults’ ministry, support for the family; marriage and counselling services. The Council also has the responsibility for encouraging and resourcing congregations to witness in their communities where they are placed.

The day’s business will conclude at 9pm, following a Report from the Linkage Commission, which acts on behalf of the General Assembly in allocating ordained ministry and related financial resources to congregations.

The Commission’s report summarises its work and details the congregations, 46 in total, that were granted Leave to Call a new minister during the year. It also highlights two new linkages: the congregation of Carrowdore & Ballyfrenis with Ballyblack on the Ards Peninsula in County Down and Blackrock in County Dublin with Bray in County Wicklow. The General Assembly will be asked to approve the amalgamation of First Killyleagh & Second Killyleagh in County Down. Two further amalgamations in Belfast will also seek approval – May Street with Fisherwick Presbyterian and Crumlin Road Presbyterian with West Kirk on the Shankill Road.

Other business will also be before the General Assembly. For further in formation seewww.presbyterianireland.org/PCIGA2019.