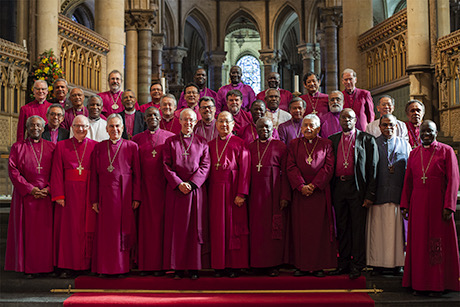 Mark Michael and Andrew Goddard write in The Living Church

The Anglican primates who will gather January 12-15 in Jordan represent “a generational shift between [those] who fought the early stages of the ‘war’ [over sexuality] and those who are now trying to make the early stages of the peace,” according to an official of the Anglican Communion Office (ACO) at a press briefing in late December. Thirteen of the Anglican Communion’s forty provinces have elected new chief bishops since the last Primates’ Meeting in October 2017.

The three-day gathering will be hosted by the Archbishop of Jerusalem at a conference center near the traditional site of Jesus’ baptism in the Jordan River. The meeting, which functions as one of the Anglican Communion’s four instruments of communion, was convened by Archbishop Justin Welby at the primates’ request, especially to strengthen relationships between the leaders and to help them prepare together for this summer’s Lambeth Conference.

Building deeper relationships has been a focus among this group of primates over the past several years, said ACO officials.  The Archbishop of Canterbury has visited each primate in his home over the last several years, and he speaks regularly with them, using a video-conference facility recently installed at Lambeth Palace. He also worked to build consensus around the focus of the upcoming Lambeth Conference through a series of regional gatherings of primates. The bishops themselves regularly call and message each other through a WhatsApp group, which is helping to create a “relational, collaborative” culture among the senior leaders.

“Whatever the way forward may be, and how we live with that difference around human sexuality,” an ACO official said at the briefing, “I think that there is an absolute commitment across the primates that how we handle it is done in a very different spirit, with a very different model of ecclesiology, and honest conversation that isn’t into bartering and Westminster models of decision-making.”

The official said that primates who have assumed leadership since the last meeting would gather on January 12 for a day of prayer and orientation. The larger group will join them the next day for the larger meeting, which will include a report from the Lambeth Design Group about plans for this summer’s gathering of bishops from across the Communion.

The Archbishop of Canterbury will retain his traditional responsibility for determining the direction and content of the Lambeth Conference’s work, and will not “give the primates a veto.”  But an ACO official said that he is “committed to consulting and hearing their views, and receiving their input.” A communique from the primates is expected on Wednesday, January 15.  After the meeting’s official close, the primates will break into groups for the meeting’s final day to visit pilgrimage sites.

During the last two decades’ dramatic process of division and realignment across the Communion, the Primates’ Meeting has often assumed more responsibility for drawing boundaries and defining relational consequences for decisions made by individual provinces.
The 2016 Primates’ Meeting, for example, determined that the Episcopal Church “should not take part in decision making about issues pertaining to doctrine or polity” or have representation on Communion-wide faith and order bodies because of the church’s decision to allow same-sex marriage.  This decision by the primates was affirmed later that year by the Anglican Consultative Council.

Despite the archbishop’s personal invitation, four primates have declined to join the meeting. The Church of South India will be holding a synod to elect a new primate during the same week. Newly elected primates Henry Ndukuba of Nigeria and Stephen Kaziimba of Uganda have chosen to follow their predecessors’ leads, joining Rwandan archbishop Laurent Mbanda, in deciding to stay away to distance themselves from the official instruments of communion.

The same three provinces, which have played high-profile roles in Anglican realignment and GAFCON, also chose not to attend the last Primates’ Meeting or to send delegates to the 2019 Anglican Consultative Council Meeting. Nigeria, Rwanda and Uganda have also announced that their bishops will not be attending the Lambeth Conference, criticizing the Canterbury-based instruments of communion for failing to appropriately discipline progressive Western provinces and for not inviting the bishops of the Anglican Church in North America to attend the conference.