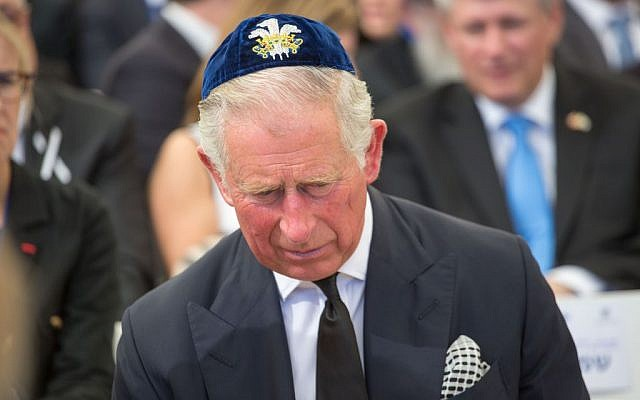 Photo above – Prince Charles seen during the funeral late former president Shimon Peres at Mount Herzl, in Jerusalem, on September 30, 2016.

The Prince of Wales will visit Bethlehem, the birthplace of Christ, and honour those who died in the Holocaust during his first official tour of Israel and the Occupied Palestinian Territories, Clarence House has announced.

Charles’ tour – the highest-level visit by a member of the monarchy to Israel and the Palestinian areas – will mark the 75th anniversary of the liberation of the former Nazi concentration camp Auschwitz-Birkenau.

The prince has been invited to the major event by Israel’s President Reuven Rivlin and will meet the statesman during his two-day visit and Palestinian President Mahmoud Abbas, who has invited Charles to visit the Occupied Palestinian Territories.

Before arriving in the Middle East, the prince will launch an ambitious project to help financial markets become more sustainable during a visit to the World Economic Forum in Switzerland.

Charles will highlight his Sustainable Markets Council during a brief visit to the Swiss town of Davos on January 22.

Scott Furssedonn-Wood, the prince’s deputy private secretary, said about the World Holocaust Forum: “The prince is honoured to be among the small number of international leaders who have been invited to address the event and have the opportunity on behalf of the United Kingdom to honour the memory of all those who were lost in the Holocaust.”

Security around the trip is likely to be tight, especially following US President Donald Trump’s decision to assassinate the Iranian military chief Qassem Soleimani, which has heightened tensions in the region.

Asked if recent events in the Middle East have affected the royal visit, an FCO spokesman said “We are monitoring the situation very closely” adding staff in the region were “extremely well practised at managing security for these kinds of visits”.

Charles’ visit has added significance as the Queen has never made an official visit to Israel or the Occupied Palestinian Territories during her 67-year reign.

The ministerial jet Voyager is believed to be undergoing scheduled maintenance and Charles will be travelling by a chartered plane during his brief visit to Switzerland and on to the Middle East.

World leaders and leading business figures have faced criticism in the past for flying to Davos by private jet.

Mr Furssedonn-Wood said: “We always look at a range of options, we take a number of factors into account when we decide how to travel, we weigh up things like cost of course with environmental impact as you’d expect, but also efficiency of time, size of delegation and crucially safety and security.”

He highlighted a number of recent trips including Charles’ official visits to Japan and India where he flew by commercial airlines, but for this tour he said all of their considerations could not be satisfied by scheduled flights.

Charles will make the two-hour car journey from the airport to Davos by electric vehicle, rather than helicopter, a Clarence House spokesman said.

The prince hopes his Sustainable Markets Council, which is supported by the World Economic Forum, will bring together leading individuals from the public and private sectors, charitable organisations and investors to identify ways to rapidly decarbonise the global economy and make the transition to sustainable markets.

Details about Charles’ full itinerary have yet to be announced but it is likely the prince will pay his respects at the resting place of his grandmother Princess Alice of Battenberg in Jerusalem’s Church of St Mary Magdalene.

She was honoured by the Jewish people for hiding and saving the lives of Jews in Nazi-occupied Athens during the Second World War.

The heir to the throne’s forthcoming visit will follow one made by his son the Duke of Cambridge who toured Israel and the Occupied Palestinian Territories in 2018.

Charles travelled to Jerusalem to attend the funerals of president Shimon Peres in 2016 and prime minister Yitzhak Rabin in 1995.