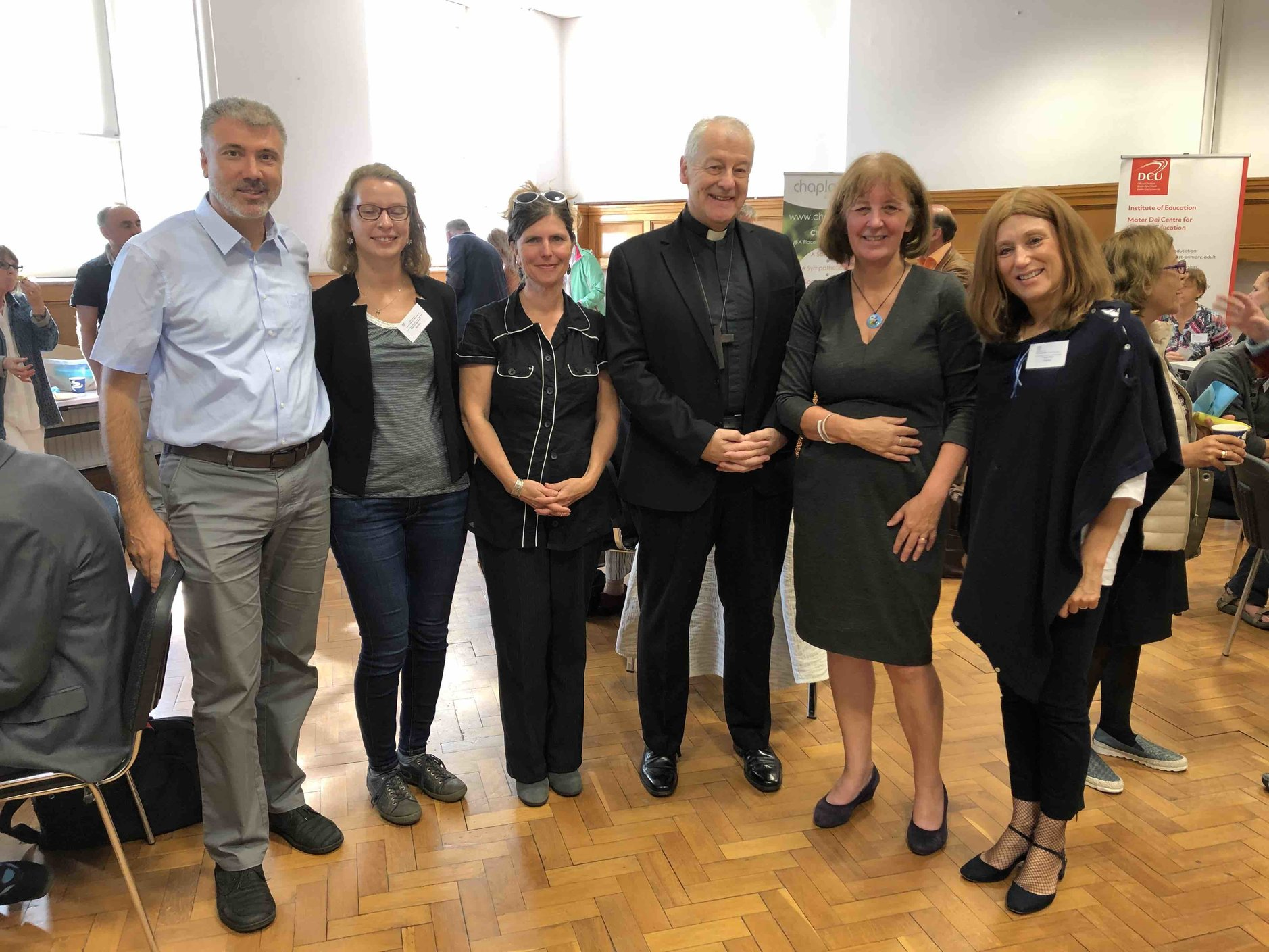 Members of the European Forum for Teachers of Religious Education (EFTRE) gathered in Dublin last weekend for their 2019 conference. EFTRE XIV had as its theme: ‘Reconciling Realities in Religious Education” and was based at St Patrick’s Campus of Dublin City University.

Photo above – Archbishop Jackson with members of the EFTRE executive committee in St Patrick’s DCU.

EFTRE aims to contribute to the international cooperation of teachers of RE, develop links between RE teachers in member countries, strengthen and promote the position of RE in European schools, and lobby to improve the provision and quality of RE in Europe.

Conference delegates enjoyed a gala dinner in Christ Church Cathedral last Friday evening (August 30) during which they were addressed by Archbishop Michael Jackson. He suggested that one of the strongest fallacies of the day was that secular is neutral. This resulted in the secular gaining automatic superiority over religion which is then characterised as loaded and defective.

“Once the battle lines are drawn in this way, religion finds it very difficult to make its case as it is cast in the role of the dinosaur option. Hence we are today conditioned to see the secular as providing information and the religious as providing deformation. The secular also has claimed the high ground of being self–explanatory at the heart of this neutrality by the sublimation of technological function and scientific understanding as the philosophy of life for the post–modern woman, man and child. This is where education kicks in as a key player. In a world where we all now have no option but to struggle with a diversity that will not recede, inspiration and commitment increasingly are expressed in anger and confrontation,” he explained.

The Archbishop said that religion and faith lay deep within cultural identity. An Ireland, angry with its religious past, refused to grasp that the diversity of its current citizens, coming from 220 different countries, saw the freedom to be religious and express faith publically as part of its identity, he said, adding that it did not suit pre–secularists and secularists in a post–secular age.

The Church of Ireland has patronage of 200 primary schools and about 40 secondary schools, he noted. Patronage enabled the Church to create and convey an ethos, a characteristic spirit within which the curriculum is delivered.

“From an Anglican perspective, Scripture Tradition and Reason are the pivots on which our theological method rotates. Taken on their own, these undoubtedly seem rather arid and academic, but taken together they help pedagogically to inform experience. They are not value–free nor have they ever claimed to be – but neither is secularism! They are part of the ways in which Anglican Christians connect the scientific and the sociological world around us to core tenets of value and precedent and prospect. By law, we hold patronage and it is our duty to exercise it in shaping the breathing and the rhythm of the school day as part of who we are and what we offer into our society. It is part of what we do as citizens with a sense of purpose in terms of altruism and of contribution to a value–enriched life. Overwhelmingly, parents like it as an expression in schools of in loco parentis. The problem is that many in power want to remove our values from civic life. And so it becomes a circular argument based in mutual irreconcilablity,” he said.

He added that the value and enrichment of the theme of the conference was that it recognised that here were realities (plural) and that it was not a matter of one narrative being the prescriptive narrative of entitlement over others. Archbishop Jackson said that religious education and religious values wanted to be part of the national conversation. Children, teachers and parents could be leaders in citizenship through the perspectives that open minded religious education brought as an equal partner with the rest of the kaleidoscopic experience of education, he stated.