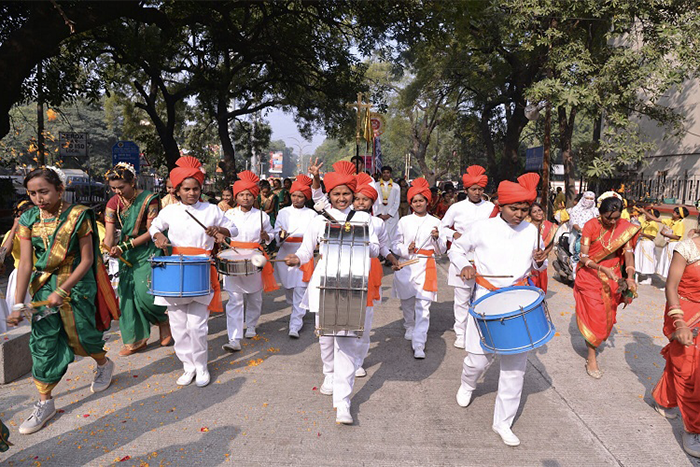 Photo above – Young drummers and dancers take part in a joyous procession through the streets of Nagpur to celebrate the 50th anniversary of the formation of the United Church of North India.

The Five Marks of Mission: One – to proclaim the Good News of the Kingdom

USPG, one of the oldest of the Anglican mission agencies, was born in 1701 to proclaim the Good News of the Kingdom. During its 319 years of missionary history the proclamation of the Gospel has been central to its mission; although parts of its history, particularly its involvement in slavery, are shameful, and certainly not of the Kingdom of God.

Christian mission has evolved greatly over the three centuries, and USPG has been called to reimagine what proclaiming the good news might look like in successive generations and in an increasingly large number of contexts. Now, under its three strategic headings: Rethink Mission, Energise Church and Community and Champion Justice, USPG works in partnership with Anglican and united Churches across the world as together we proclaim the Good News of the Kingdom. In various places this looks very different:

St John the Evangelist was the first Protestant Church established in Casablanca. Consecrated in 1906, it is the oldest operating church building in Casablanca and one of the few official places of Christian worship in the city. Over the past seven years, attendance at the church’s Sunday services has grown steadily. Here the Good News of the kingdom is being proclaimed!

New congregation members include migrants from east Asia (especially from the Philippines) and displaced people from sub-Saharan African countries such as Sierra Leone. Last year the church’s new community centre was opened. Here the church is aiming to offer training to help people develop personal skills, to provide a place for social and spiritual activities, to provide a subsidised hot meal twice a week for some of the displaced people, and a library for studies and after-school classes.

The community centre has also been used as a temporary home for the church, because the old church building is now too small to hold its ever-growing congregation. The new, bigger church building will open on 28 March this year. Alleluia!

In Zimbabwe, Bishop Gaul College is the national Anglican theological college in the Church of the Province of Central Africa (CPCA). It is a place of proclamation, and a place where those who will proclaim the Gospel are trained. Since its establishment, the college has produced bishops and over 100 priests. It caters for students of the five dioceses in Zimbabwe and the Diocese of Botswana.

More recently, the college has opened to students from countries outside CPCA; thus bringing an international flavour and opportunities for students to think beyond their borders. Increasingly students from the laity are now being trained alongside ordinands. The College is committed to the formation, training, and equipping of clergy and laity for Christian ministries: proclaiming the Gospel in word and action.

On 29 November 1970, the Church of North India (CNI) was born when six protestant denominations came together to form one Church. Leaders of the six denominations gathered at All Saints Cathedral in Nagpur for CNI’s inauguration. This year, CNI marks a half century of “unity, witness and service” with a year-long Golden Jubilee celebration. Bishops and representatives of all of CNI’s 27 dioceses came to the celebrations, which involved the proclamation of a joyous procession in the streets of Nagpur and a thanksgiving worship service.

The events to mark the jubilee fall into three phases: “refreshing memory”, “revisiting the mission of the Church” and “celebration”. The first phase involves thanking God for the people who first brought the Gospel to India – going all the way back to St Thomas, who was a missionary to India in the year AD 52.

The second phase involves taking stock of the past 50 years to see how well CNI has upheld its mission of “breaking down the barriers of caste, class, gender, economic inequality and exploitation of nature”.

The third phase started with a huge ceremony in Nagpur last November, and continues throughout 2020 to proclaim the Good News.

USPG, in Britain and Ireland, seeks to relate these, and so many other Good News stories back to churches, communities and individuals. We have a speaker programme where a network of volunteers across the country are willing to share Good News from USPG partner churches around the world. We offer opportunities for individuals to experience the life of the church in a new context, through USPG’s Journey with Us and Expanding Horizons schemes and on returning, inspired and transformed by the experience, their proclamation of the Gospel cannot fail to be enriched.