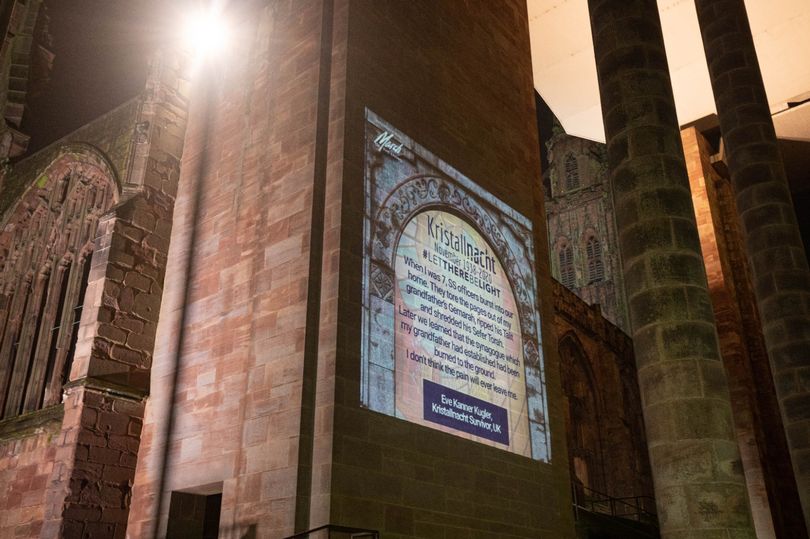 Turning point in one of the darkest chapters of history

This week Coventry Cathedral took part in a worldwide commemoration to mark the anniversary of Kristallnacht.

A film featuring interviews with survivors was beamed onto the cathedral’s walls as world leaders and people of different faiths came together to speak out against hatred and intolerance.

Coventry Cathedral was one of the religious buildings chosen to be a part of the commemoration, along with the Westend Synagogue in Frankfurt, one of the few in the city not destroyed on Kristallnacht.

Messages from Holocaust survivors and public figures were beamed onto the walls of the Old City in Jerusalem.

Considered a critical moment in the chain of events that led to the Holocaust, Kristallnacht took place on November 9, 1938.

Over two days the Nazis launched a pogrom, burning and smashing more than 1,400 Synagogues and Jewish institutions in Germany and Austria.

Holocaust and Kristallnacht survivor, Eve Kugler was seven years old at the time of Kristallnacht in the German town of Halle, where just two years ago the synagogue was attacked.

She said: “In the middle of the night five uniformed SS officers and the local police chief, trashed our apartment and led my father out of our home.

“The synagogue which my grandfather had established was torched and burned to the ground. Two years ago, I was absolutely horrified to hear about the violent anti-Semitic attack on Halle synagogue. I felt it was an attack on my own synagogue.

“I say “don’t be a bystander. It is your duty to speak up and act to make the world a better, safer, happier place.”

In addition to Coventry Cathedral – which was severely damaged by Nazi bombing in the Second World War – other religious institutions to take part in the commemoration were the Great Choral Synagogue in Kiev, Synagogues in Bahrain and Dubai and Synagogues and churches across the United States, UK and Japan, as well as a mosque in New York.

UK Prime Minister Boris Johnson said: “That night of broken glass led to humanity’s darkest moment. Today we unite against anti-Semitism, racism and intolerance. We will never let the light go out.”

Mr Johnson was joined by Mayor of London Sadiq Khan, who said: “Kristallnacht was a turning point in one of the darkest chapters of history.

“It must serve as a lesson to the world of the dangers of allowing hatred, racism and prejudice to grow and fester. We must re-commit to building a future defined not by hatred, but by hope, unity and love.”