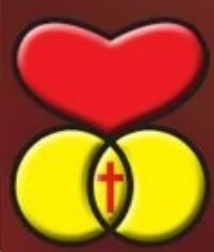 Above – The Marriage Encounter logo

Yesterday was World Marriage Day in the United States, when prayers were said for all married couples at all parish Masses. We may soon see a similar observance in Ireland, but on July 12th, Feast Day of SS Louie and Zélie Martin, the Church’s first canonised couple, Cian Molloy writes on Catholicireland net.

Yesterday, in the United States, Catholics were celebrating “World Marriage Day”. Organised by Marriage Encounter USA, World Marriage Day is a national observance in America that celebrates the vocation of marriage, with special prayers of the faithful today for all married couples.

Marriage Encounter USA have given the observance a “global” billing, in the same way that American sports fans call their national baseball competition “the World Series”.

“We are aware of the event, but it is mainly a US thing,” said Madeleine McCully of Marriage Encounter Ireland’s national leadership team. “We are looking at doing something similar – it is something we have only just started discussing, it’s not even in the pipeline – of doing a national day of prayer for marriage on the feast day of the parents of St Thérèse of Lisieux, Louis and Zelie Martin, the first couple to be canonised as saints.”

Canonised by Pope Francis in 2015, the Martins are exceptional saints in more ways than one. Most saints’ feast days are on the day on which those saints died and entered into the Kingdom of Heaven, but uniquely the feast day of Louis and Zélie is on the day they were married, which happens to be 12 July.

In Ireland, the Twelfth of July is seen by many as a day of division, when Unionists and Loyalists in Northern Ireland celebrate the anniversary of the Battle of the Boyne, when Protestant King William beat Catholic King James in 1690.

Celebrating the charisms of Ss Louis and Zélie would create a celebration of a totally different, non-political, “union”: the sacrament of marriage.

“Marriage deserves to be celebrated,” says Madeleine, who first became active in Marriage Encounter with her husband Tom in 1977. “Community starts with the couple and the love that the couple have spreads to their family and then out to the parish and then out further to the wider community. The commitment that couples make in the sacrament of marriage has a far-reaching ripple effect.”

Marriage Encounter was founded in Spain, in 1962, by a Barcelona priest, Fr Gabriel Calvo, who saw that married couples can benefit from help in improving their communication with one another and in using the potential of their love to reach out to their families and their local communities.

One of the chief ways that Marriage Encounter does this is by organising “enrichment weekends”, where couples focus on developing ways of working responsibly and intimately together. In Ireland, the organisation operates six “newcomer” weekends a year, but there are also weekends organised for couples who have already been on one or more enrichment weekend.

“Every stage of marriage has its own riches and challenges – raising children, raising teenagers, children leaving home, entering retired life. It is good to put aside time and to work together on appreciating the riches and tackling the challenges.”

Of course, times have changed greatly since Marriage Encounter was first established. “Back then very few couples got to go away on a weekend together, they just didn’t have the opportunity,” says Madeleine. “Now many couples do get to go away to spend time together. Marriage Encounter just offers a more structured way of celebrating your relationship.”

For more information about Marriage Encounter in Ireland, visit:
[ www.marriageencounter.ie ]