Vandalism and threats to faith will increase in Ireland, priest says 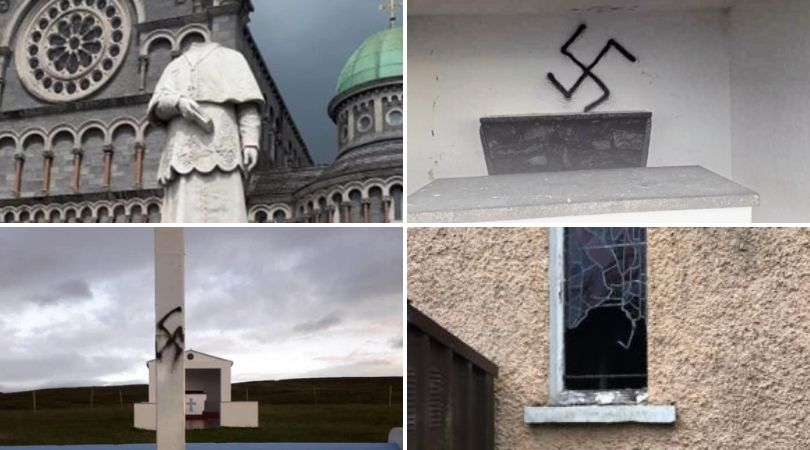 An Irish priest is warning that vandalism to churches and religious monuments in Ireland will increase as the country’s sense of the sacred continues to decline, William Mahoney writes in Church Militant

A series of attacks on religious buildings, statues and monuments in Ireland, along with the widespread loss of the Faith in the country, has led one priest, Fr. Michael Toomey, to conclude that Christians in Ireland will “be open to more and more criticism and perhaps, sadly, attacks.”

Recent acts of vandalism against churches and religious monuments in Ireland include:

The removal and stealing of the head off a statue of Abp. Patrick Leahy outside Thurles Cathedral in June.

The painting of Nazi swastikas at the end of July all over the religious site of Holy Year Cross at Scrouthea Hill in the Comeragh mountains.

The destruction of a stained glass window of the Sacred Heart over the altar at St. Michael’s Church in Shroid ― along with three other windows ― on Saturday; this was the second attack on this church (the first was Easter 2017).

“The swastika graffiti at Holy Year Cross was discovered when a local committee went there Aug. 6 to prepare for the annual August Bank Holiday Mass.”

Such vandalism has not been limited to Catholic churches and monuments.

In February, vandals attacked an Anglican church, St. Michan’s in Dublin, Ireland, which was founded in 1095 as a Catholic church and remained one until the Reformation.

The vandalizers flipped some of the bodies in the vault, twisted the head of a nun’s corpse backward and desecrated the body of an 800-year-old crusader, severing his head from his body and stealing it from the site.

“We’re not quite sure what the motive behind all this is. Whether it is vandalism or something else, we do not know,” said David Peirpoint, the Anglican archdeacon of Dublin.

The skull of the 800-year-old crusader was found by the police one week later and returned to the church. The police did not provide any details in March as the investigation was ongoing.

The swastika graffiti at Holy Year Cross was discovered when a local committee went there Aug. 6 to prepare for the annual August Bank Holiday Mass, a tradition at the site that began in 1950.

Toomey offered the Mass there despite the graffiti, noting in the homily that the vandalism affected the entire community by the “childish and grotesque actions.”

The Faith in Ireland has been in an ongoing state of decline.

In 2015, Ireland became the first country to legalize same-sex marriage by popular vote; in 2018, Ireland legalized abortion by referendum.

“We need to bring ourselves back to the sacredness of it.”

As a result of this growing secularization in Ireland, Fr. Toomey said that churches are now viewed as public buildings devoid of any sacred quality. Many attend Mass while chewing gum or drinking coffee.

“It is actually the House of God and it’s not that people are being disrespectful deliberately, it’s just the society we live in ― they see it as just another public building perhaps,” said Toomey.

“We need to bring ourselves back to the sacredness of it,” he added.

Church Militant reached out to Fr. Toomey for comment but did not receive a response by press time.