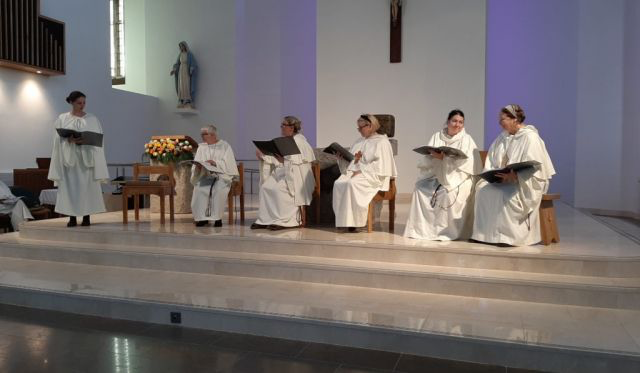 A special all-female performance of a play written by esteemed Irish dramatist Brian Friel took place on Sunday in Creggan  in memory of Lyra McKee.

Art Over Borders’ 4th Lughnasa FrielFest paid tribute to the young writer and journalist who was killed in the city with a free performance of Brian Friel’s 1962 play The Enemy Within.

The Enemy Within is centred around Columba’s room or cell in the Autumn of 587, on the island of Iona, off the West coast of Scotland.

The entire play centres around issues such as ‘Who am I’ and ‘To whom am I connected?’

Published in 1962, Friel wrote the play connecting it to the social troubles at the time.

Columba’s enemies were not only limited to his inner self, but also to his own family. Even though he had left Ireland, presumably for good, his family held an immovable grip which crippled Columba in his work on Iona.

This pressure contributes to the inner struggles Columba is forced through in several parts of the play.

Sunday’s performance on the last day of the four-week festival was dedicated to the memory of Lyra McKee who was shot dead during rioting in the Creggan area on April 18 of this year.

Her partner Sara Canning was invited along by the organisers. Derry born festival co-curators Sean Doran and Liam Browne felt it was appropriate and timely to honour the memory of Lyra McKee with this all-female world premiere presentation.

Speaking to the Derry News, Mr Doran said: “Our international Brian Friel Festival is jointly held in Donegal and Derry, with the Derry location now celebrating the playwright’s more socio-political plays and themes of justice, gender and ethnicity.

“The Black spiritual singers Ruby Philogene MBE and Tayo Aluko will join the casts of Brian Friel’s The Enemy Within and The Freedom of the City offering sung preludes and interludes to the Omagh and Derry performances.”

Mr Browne added: “We had the pleasure of working with Lyra previously when she kindly agreed to be part of a discussion panel in our Home of St. Patrick Festival in Armagh in 2017. On that occasion she explored the particular challenges that face young women today, the pressures to reveal, issues around identity, privacy and such.

“The subjects which Friel explored throughout his work of gender, poverty, ethnicity, isolation and spirituality mirror the themes which also concerned Lyra and about which she wrote.”