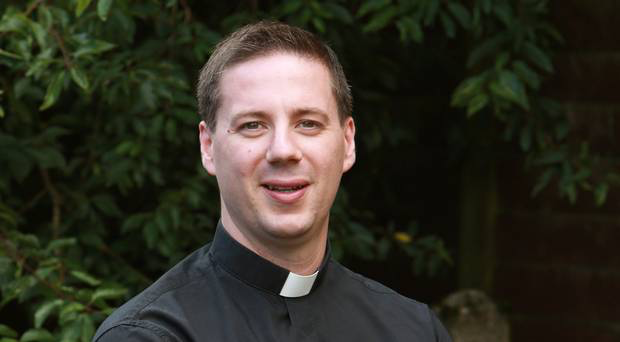 A Co Antrim clergyman has become the youngest parish priest in Ireland. Fr Conor McGrath (32) previously worked in Antrim and was curate in Drumbo and Carryduff prior to his new appointment as parish priest of Glenravel in Ballymena.

The middle child of a family of five, he grew up in Glengormley with his parents John and Marie and siblings Christina, Paul, Neal and Fionnola.

Conor says he was in his mid-teens when he felt the call to a life of ordained ministry.

“For as long as I can remember I have wanted to be a priest,” he told the Belfast Telegraph.

“Even as a child my siblings and neighbours were co-opted into one of my ‘games’ of Mass so, clearly, from an early age the inclination to be a priest was there.

“The idea sort of grew up with me and then came to fruition when I was 16.

“There was no history of clergy in our family but we are all practising Catholics and very faithful people,” Fr Conor added.

“There was also no great surprise when I told my family about wanting to become a priest – they have always been completely supportive.

“I never experienced any negativity amongst my friends either, who would be of different beliefs.

“One of my close friends, who is now married with children, even came with me on a vocations weekend, so people have always been helpful.

“Even though the image of the Church and the priesthood in particular has attracted negative press in the past, I have never let that deter me.”

As well as training at St Malachy’s Seminary, he read theology at the Pontifical Irish College in Rome and was ordained in July 2012 at St Bernard’s Church, Glengormley.

A keen cyclist who has also been known to hit the dancefloor for charity contests, he says being Ireland’s youngest parish priest is simply “a sign of the times”.

“There are challenges as in every walk of life, in particular continuing to connect with the people of our parishes and building up a sense of closeness to God.

“It’s also about building up connections with those of other faiths in our communities as we’re all part of the same team, if you like,” he says.

“For me it’s a very rewarding and privileged position with great opportunities that I’m very excited about.

“I certainly don’t regret my decision.

“I know of young men, even in the parish where I was ordained, who have been willing to give the priesthood a go.

“It hasn’t worked out for all of them but it shows that the well isn’t completely dry,” he adds.

In his new role in Glenravel, Fr Conor will serve as the administrator of The Braid and provide chaplaincy services to schools in Ballymena and St Killian’s College in Carnlough.

While he will miss “the great parish community and real country feel” in his current curacy in Carryduff, Fr Conor is relishing his new role.

“I’m excited for the future and for what God will do in that particular place.

“It’s a lot of responsibility and it will be a big change but I am looking forward to it.”

He added that while “in some respects” his new position has placed a lot of weight on his shoulders, he is trusting in God’s providence to take care of him.

Fr Conor’s move to his new parish is part of the Down and Connor diocesan changes announced by Bishop Noel Treanor who was appealed for more men to consider the religious life given the continuing decline of clergy numbers throughout Ireland.

“Undoubtedly, the increasing age profile of clergy and declining numbers of available priests has created its own challenge in fulfilling the Church’s mission and ministry, a challenge which our clergy respond to on a daily basis with generosity and faith-filled dedication,” the bishop said.